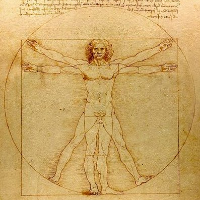 Description: Russel Carver is a human civilian who lived in The Encampment since the town was founded. He's about about six foot tall and tends to wear a sandy coloured cloak that makes jingling noises when t's jostled around too much, as it holds his stone carving tools as well as other items. Russel has auburn hair, dark green eyes and slightly tanned skin. Since Russel is a civilian who's always relied on his ability to carve stone to make a living, he's neither overly muscular nor overly athletic. He's quite passionate about what he believes to be right as well as protecting people, and not afraid of speaking his mind, especially when the beings he sees as seeing themselves as more important or higher level than him start telling him what to think or feel about the predation upon humans that happens in and around The Encampment. Telling him to view people as one would view a game animal-such as asking if his species is capable of recovering from the numerous attacks by having a sufficient amount of offspring-is liable to get him quite mad, no matter how or who by. Thanks to past events, he's become rather hostile around certain deities, damn any consequences for it.

During Not a Creature Was Stirring, Russel lost his right arm due to having it torn off by a mind controlled animal attack, leaving him with nothing more than a stump. Russels hair has become ashen, white at the roots before turning slowly black at the tips. His arm has grown back from the stump, however from his shoulder down it's entirely covered in black bandages, and his eyes are now red.

Items: Stone carving tools, a portal generator given to him by Ariel for emergency medical help when any of the refugees he's found himself leading gets seriously hurt and unable to go to the hospital, various other items.

Abilities: None. Russel is your average human male from a more medieval time on Earth. Apart from carving stone into sculptures, monuments and sometimes blocks and decorations for buildings.

History. Russel was one of the first settlers torn into the world of Ana during after the first two weeks of its creation. But Russel was not taken alone, he had the fortune of having his wife come with him. Initially, the pair melted into the crowds of the settlement, doing their work, adjusting to the shock of multiple species. Within the years Russel had a family, a son and a daughter four years old and three respectively until the events of the Reality Wars, where after the horrific experience of being transformed into a mindless Sheeple and then turned back by Au'Marui Russel found out his two children were missing. It wouldn't have taken a rocket scientist to figure out that they were dead, likely eaten by The Collectors Dragons. A great tragedy, but one Russel was helped to eventually get through by his wife, although such a thing is not something anyone would be able to get over. The pair returned to their ways of life as Ana grew more dangerous around them, but they kept on. It was Russel who carved the monument of the fight between The Collector and Au'Marui, thus it was Russel who felt the more bewildered when the mad god turned evil and set his armies upon the town, in a fight that ended up killing Russels wife. Finding out from the talk of the town afterwards it was because, even though the god had known that this was coming he had not told anyone about it until it was too late Russel decided that he was done with gods of any kind. It wasn't long after this that the stonecarver started to make himself more prominent. First by being the only one that had decided to make the memorial stone to the Wars and the people that had fallen by the statue he had originally carved, to remember those that would never have a chance to come back. It was an unforgivable crime that noone had done this before him as far as he was concerned, and the bubbling anger is what initially started him off to make it. Once all the names were done from the wars, the ones who were lost due to any other means started to be added, making it quite clear that the settlement was in no way as idyllic as some would have you believe. Not for those on the bottom of the sentient food chain anyway. When human life became so scarce that he could barely see anyone human Russel took the 20 people he could find and convinced them to lock themselves in a large house, refusing to let anyone in that he didn't recognise for fear that they would become nothing more than food or toys as well. It was only when Drausus approached them that the group that became known as the Refugees agreed to leave for the safer, more secured Aznar Tech building. That's where they are now, often helping out the Aznar employees in return for their safety and it's where Russel often stays, He cannot trust that the inhabitants of The Encampment will not turn on him for being a weak human. That and the more he visits, the less humans there are. Yet these creatures are living in houses of humans he knew, calling themselves by their names and even claiming that they know him. He's not sure what's going on but the last thing he wants to see is for humans to go extinct because it seems to him that almost noone cares.

Whilst stonecarving he was approached by a human woman named Ariel, who seems to want to help. Russel initially reluctantly took that help but grows more receptive to listening to her advice the more he talks to her.

In perhaps a fit of guilt or remorse, upon seeing a flame he knew to be a deity go out on his shoulder Russel offered one of his most prized possessions to her so she didn't disappear entirely. It has led to an unlikely friendship between the man and the young goddess, whom kept the image of the picture on her person until she could give it him back. Russel eventually agreed to be her envoy, and works together with her now. However, apart from the difference in his appearance Russel has refused any blessings, feeling that they would set him too far apart from the rest of humanity in the long run and might interfere with his ability to empathise. Plus, he wants to make his own way without relying on a deity, even one he really likes.

Russels hair has become ashen, white at the base before turning black at the tips. His eyes are now red, and he has Mitsukos symbol burned onto his chest. Neither of them knew about the latter part however, and he's not sure what to think of it, either.

Notes: Russels heart is in the right place although his methods are sometimes a little more eccentric than one would expect, but this is because of Russels tragic past and his desire that noone else should suffer as he did. His most desperate desire is that the damned higher beings understand the sort of suffering they can and have inflicted upon mortals. He just wants them to truly know how it feels to be near helpless, like he did.