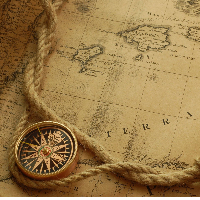 Kata is world of desert, mountain, and tundra; This planet is cold, barren, and dark. It gets nearly no sunlight, due to living in Ana's shade. Instead of open oceans, Kata has large glaciers and frozen plains; The only way to gain drinkable water in this world is to find a Spring; warm water from near the core of the planet that bubbles upward. Springs appear seemingly randomly, and disappear after a few hours, though there are some springs that can last for weeks.

Plant life varies from enormous mushrooms and fungi found in the caverns, the warming Paradox Palms and all way down to the humble but toxic Crumble Moss. The majority of Kata's fauna can be found in the caverns where there is safety from the biting cold, but there are also some very hardy creatures that have adapted to the frigid conditions and survive outside the caverns, either in the frozen oceans, in the air and even roaming the frozen plains and mountains.